Power Of The Four Elements 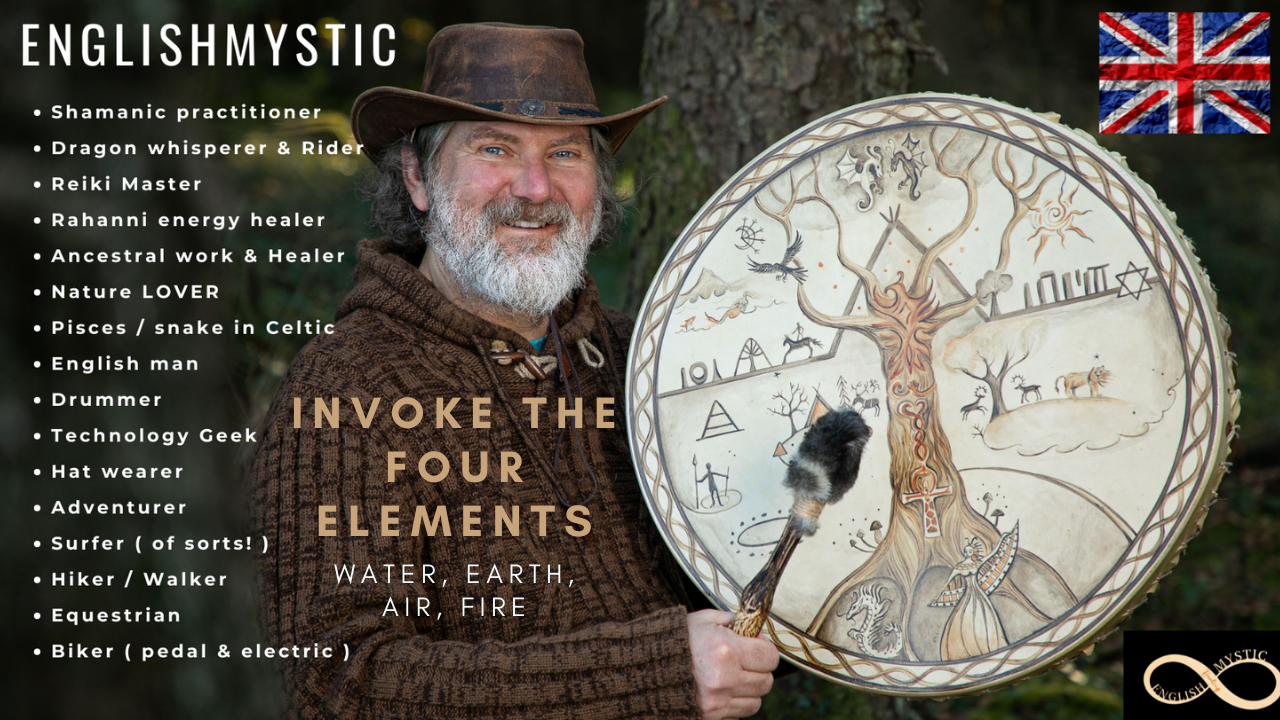 Shamanic rituals call on the powers and protection of the Four Elements of Fire, Earth, Air, and Water and the Four Directions North, West, East & South.

The Four Elements pair with the Four Directions as:

The blog entry The Four Directions of Shamanism describes the powers and attributes of the directions and here follows those for the Four Elements, you can see that calling on these powers pulls in a vortex of immense energy that the Shaman can tap into and use for Shamanic rituals such healings and soul retrievals, power animal connection, journeying to the alternative realms etc.. 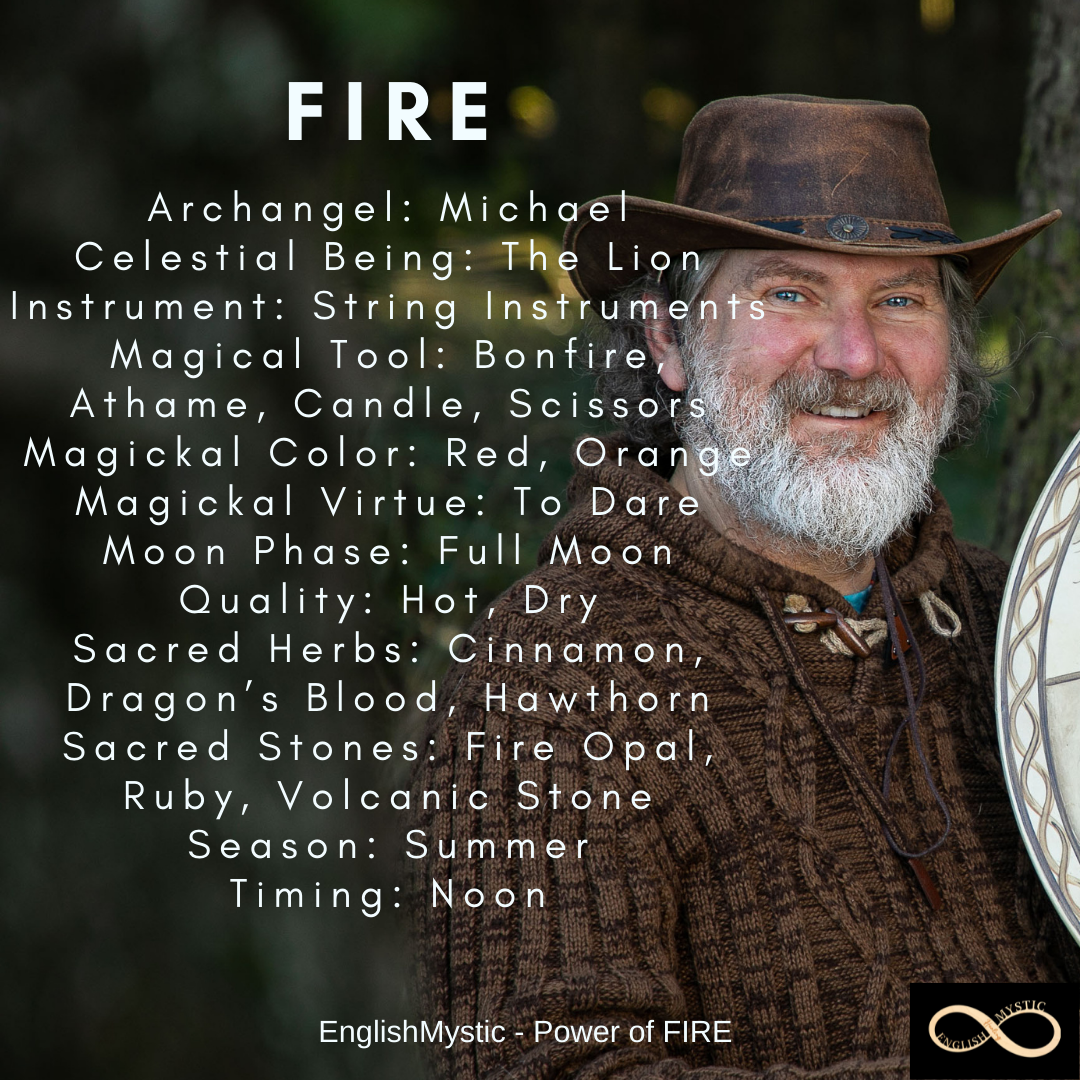 The Element of Fire manifests itself in burning flames, burning wood, fires, volcanoes, lightning, and the Sun.

Animals associated with The Element of Fire are the fox, cheetah, tiger, lion, and other predatory animals, and mythological creatures, the Phoenix, Dragon, and Salamander.

In Tarot, Fire is represented by the suit of Swords or Daggers, and the Wands or Rods.

In Astrology, the signs of Aries, Leo, and Sagittarius are dominated by this element, and they tend to be enthusiastic, passionate, and social, though they can also be ill-tempered, and moody.

The Element of Fire has the following attributes; 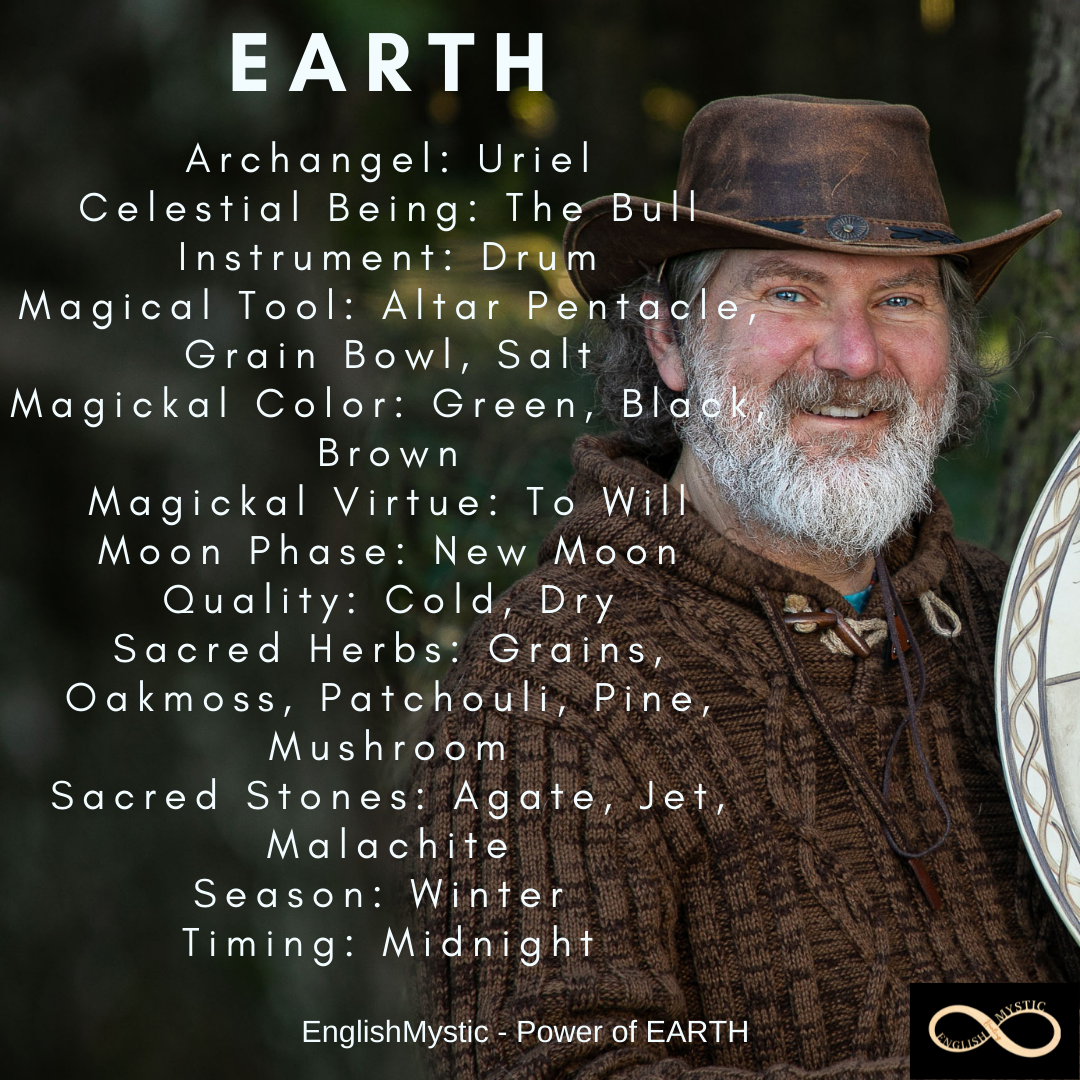 The Element of earth manifests itself in trees, plants, mountains, caves, forests, fields, and gardens.

Animals associated with Earth are the boar, the bear, the snake, the bull, and the stag, as well as the mythological creatures, elementals of Satyrs or Fauns, Gnomes, and Dryads (tree nymph or spirit).

In the Tarot, Earth is represented by the suit of Pentacles or Coins.

In Astrology, the signs of Taurus, Virgo, and Capricorn are dominated by this element, and they tend to be practical, calm, responsible, and cautious, though they can also be stubborn and inflexible.

The Element of Earth has the following attributes; 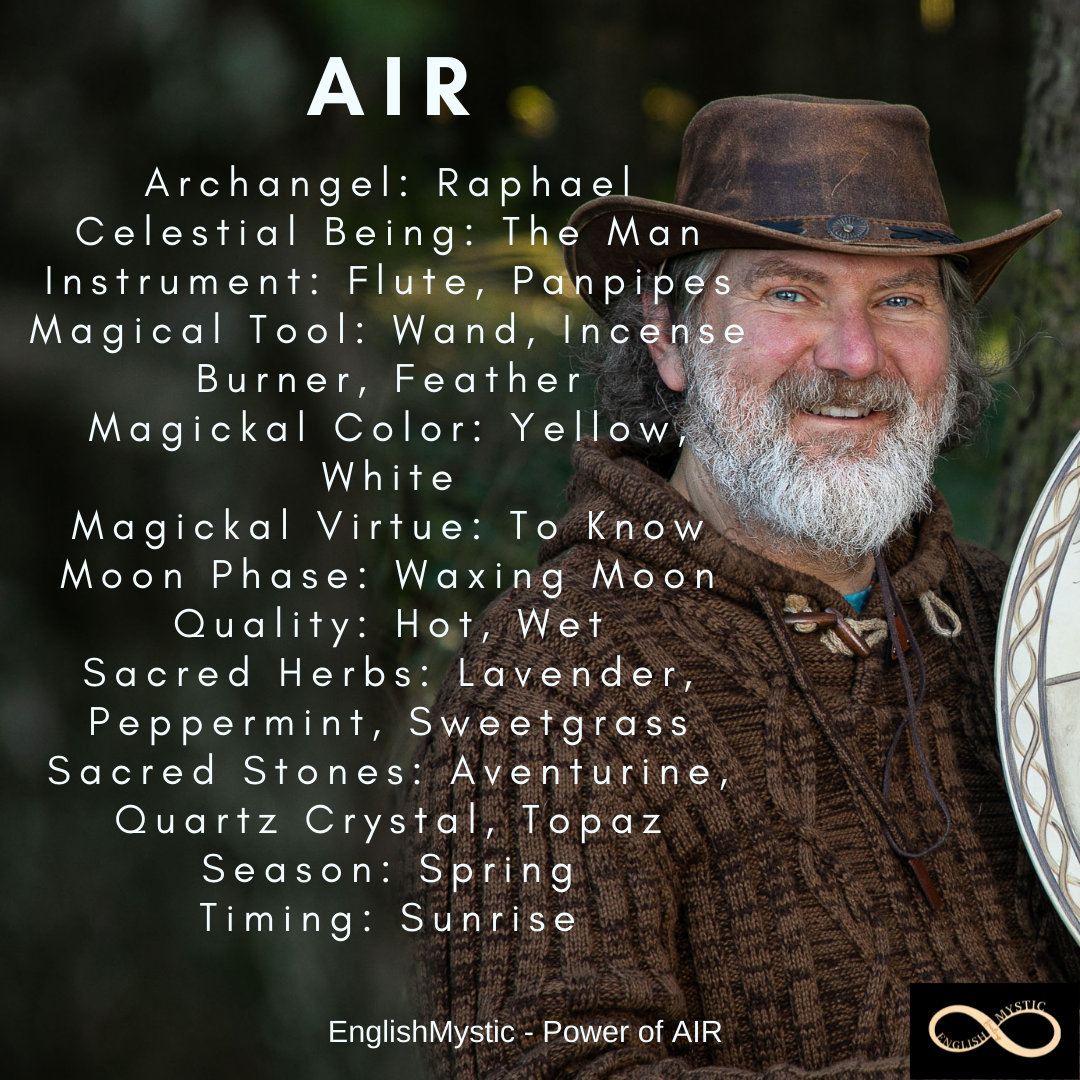 The Element of Air represents matters of the mind, intellect, communication, knowledge, and study.

The Element of Air manifests itself in the winds, in birds, insects, and other flying creatures.

The Air elementals are called sylphs.

In Tarot, Air is represented by the suit of Wands or Rods, and the suit of Swords or Daggers.

In Astrology, the signs of Aquarius, Gemini, and Libra are dominated by this element, and they tend to be analytical, articulate, extroverted, and great at small-talk, though they can also be restless, and overly opinionated.

The Element of Air has the following attributes; 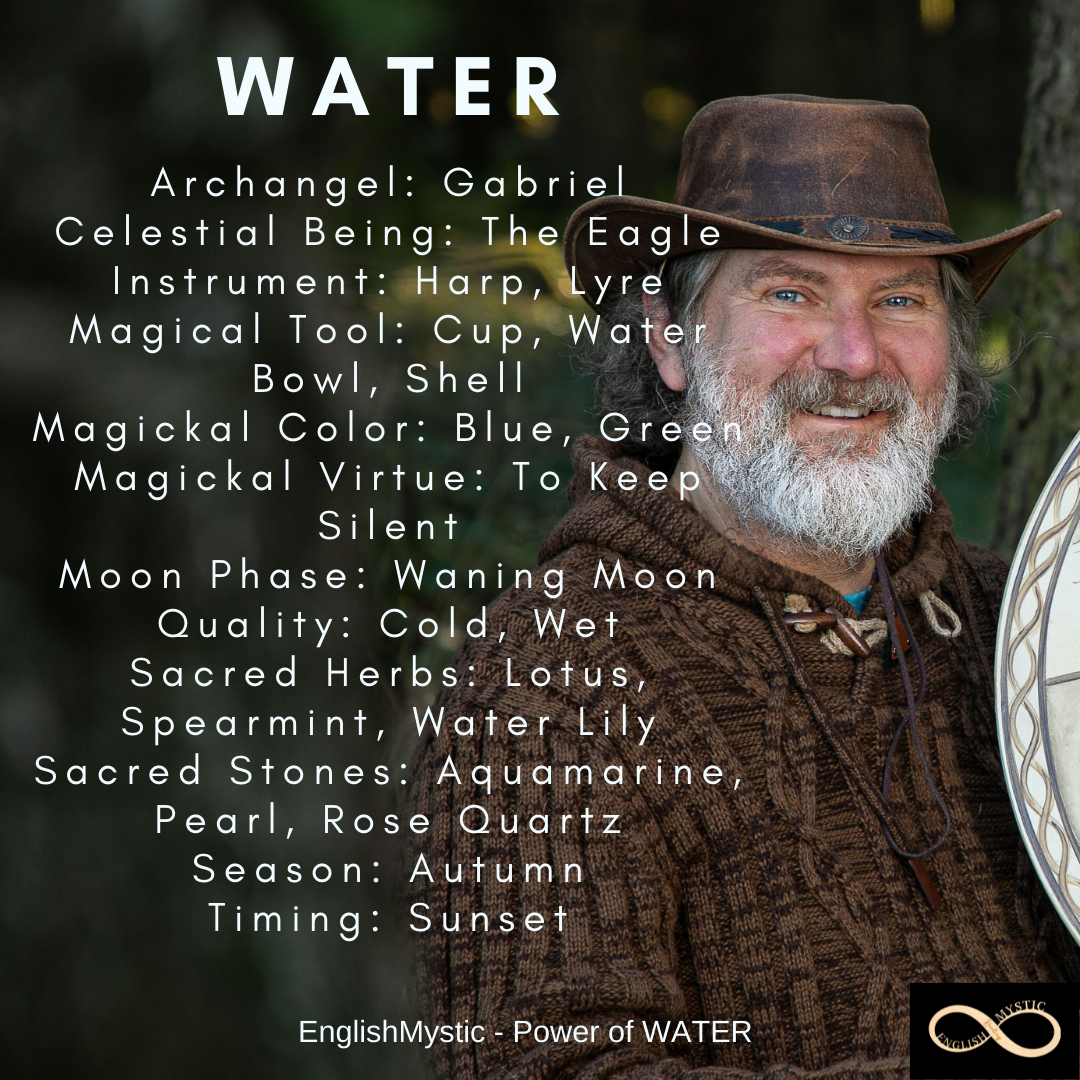 The Element of Water represents emotions, wisdom, the soul, femininity, and intuition.

The Element of Water manifests itself in oceans, lakes, rivers, streams, wells, fog, and other bodies of water or drinks and we are made up of a lot of water.

Animals associated with the Element of Water are dolphins, whales, turtles, and any type of fish, as well as the mythological creatures of the Mermaids, Naiads, and Sea Serpents.

In the Tarot, Water is represented by the suit of Cups or Cauldrons.

In Astrology, the signs of Scorpio, Cancer, and Pisces are dominated by this element, and they tend to be emotional, nurturing, sympathetic and intuitive, though they can also be over-sensitive and needy.

The Element of Water has the following attributes;

As with the Four directions, we will each resonate with one of the Elements more than the others, it does not have to be associated with your astrological sign, though it may well correspond. Mine is Pisces and I do associate more with the element Water than the others and of course, I have many of the attributes of all the elements, as will you.

You can see that calling on the powers of the Elements during a Shamanic ritual calls in a lot of elements that can assist in the ritual.

I teach the 4 elements as part of my Shamanic remembrance programs; message me to investigate further or see the menu link for more details.

Much Joy to you

Stay connected with news and updates!

Join our mailing list to receive the latest news and updates from our team.Don't worry, your information will not be shared.

We hate SPAM. We will never sell your information, for any reason. 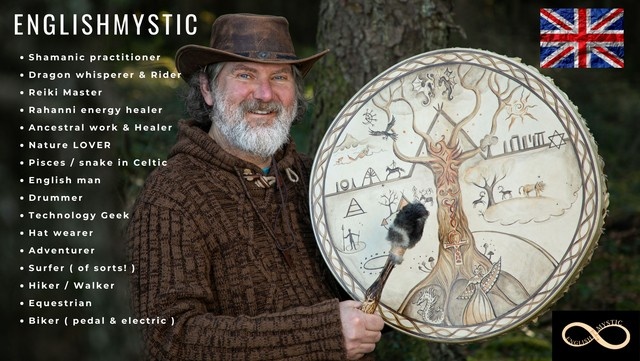 *Unsubscribe when bored of me...